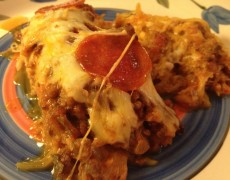 This lasagna is made with a traditional marinara sauce, Italian sausage, and spaghetti squash. I saw this idea on several low carb sites, but most of the recipes, although low carb, were too high in carbs for keto. My husband, Rick, has a really delicious homemade marinara sauce recipe. We just needed to cut some of the carbs. For the actual lasagna recipe, I adapted my Dad’s traditional recipe with low carb spaghetti squash in place of the “noodles.” One serving of lasagna is 6.4 grams of carbs. I know, it’s difficult to keep it at one serving, but eat slowly, have a side salad, and be thrilled that you can still eat this delicious “pasta” dish on the keto plan.

[Note – since publishing this recipe, I’ve discovered the Spiralizer, and I make it with zucchini noodles – faster and easier!] 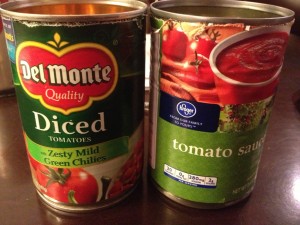 The entire marinara sauce recipe is here.
I added 1 lb. of ground cooked Italian sausage (5 grams of carbs). I mixed it into the marina sauce.
I used these cheeses (of course, all the cheese were “full-fat,” not part-skim):
One spaghetti squash (approximately 4 cups – 32g) and pepperoni slices (1g). You can also substitute and pasta. I’ve now made this recipe with yellow squash instead, and it’s just as good. Check out the Veggetti

. They work like a charm!
I calculated the entire pan to be 64 grams net carbs. I cut it into 10 squares – each would be approximately 6.4 grams. See the picture below. To get a better idea, each serving has 2 pepperonis.

First make the sauce. When done, stir in the cooked and crumbly Italian sausage. (I’ll link to my husband’s recipe and process for making the sauce when he posts it on his cooking site.)

Next, cook the spaghetti squash. Here’s how I do it. I didn’t measure exactly, but I think it yielded about 4 cups of squash after cooking. I started layering the ingredients in a 9×13 pan

Here’s the layer of squash with a layer of marina over the top. 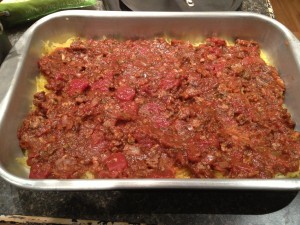 Next, add some cheese. 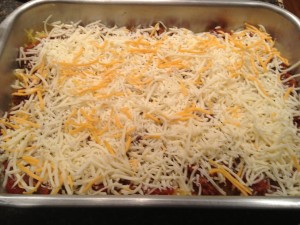 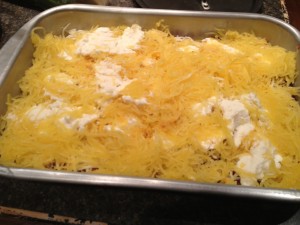 Another marina layer, mozzarella and Mexican cheese, and topped with slices of pepperoni. 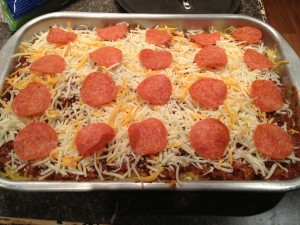 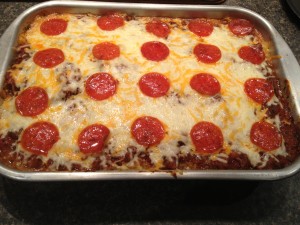 I started to cut it into 20 squares, but that wasn’t a very big portion, so I changed it to 10 servings.  Each two pepperoni section = a 6.4 gram of carb portion. 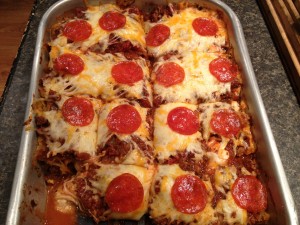 It’s bubbly and delicious. I am always surprised at how well squash and cauliflower substitute for pasta. I think you really only need some texture and filler in most recipes; actual pasta, rice, and noodles aren’t truly necessary for the good taste (IMHO).

Unless I have miscalculated, this is pretty low carb. If you want even lower, skip the “carby” cheeses, like cream cheese and ricotta – I just thought they’d add to the whole flavor sensation.

I’ll measure better next time I make it, because I portioned out the spaghetti squash without using a measuring cup, but it seems like it was about 4 cups. You could always just make it with that amount, no matter the size of the squash (although mine was pretty large).

*Note about the Kroger tomato sauce: When I first wrote this blog, I put the sauce at zero carbs. I then found info online that said one can equaled 7 grams of carbs, so I added that to the total, making the dish 8.5 grams of carbs. I was discussing my supposed error with my son, and he told me that I was correct the first time. The Kroger brand claims to be 1 gram of carbs and 1 gram of fiber per 1/4 cup of sauce. I have since reduced the total carb count of the recipe back to my originally stated 6.4 grams per serving. See pictures of the cans below. 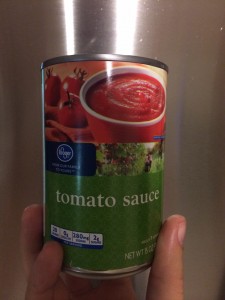 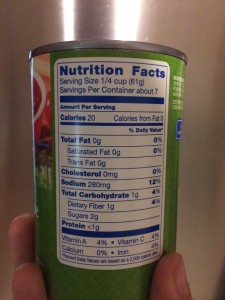 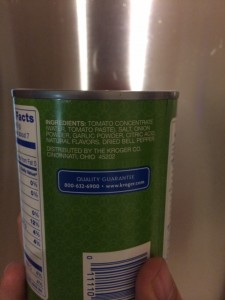